The return of the legendary Beverly Hills project to the screens! The focus will be all the same notorious topics of life for adolescents and adults. Each character faces incredible discoveries and changes in his life.

Who would have thought that the new part of the famous series will offer a completely unexpected development of events: the main roles will be played by actors who will represent not some fictional characters, but themselves!

True, the situations in which they fall are difficult to verify for reliability, therefore, most likely, the plot component will be a mixture of real events and author’s imagination.

Beverly Hills, 90210 – in the nineties, this youth American series became a cult. He spoke about the twins who grew up in the Walsh family – Berndon (D. Priestley) and Brenda (S. Doherty), who, due to circumstances, moved from Minneapolis, one of the largest cities in America in Minnesota, to bright, sunny, absolutely morally free Los Angeles and, finding themselves in a completely new world of “golden youth” living in the elite area of ​​Beverly Hills, experienced a real “cultural shock.”

The series touched on a variety of topics related to the young rising generation, and this was not only about love, friendship and youthful maximalism. It raised very important topics related to the society of that time, which touched on acute social problems: rape and alcohol addiction, domestic violence and anti-Semitic feelings, drug addiction and teenage suicides, AIDS and teenage pregnancy, the rights of sexual minorities and raising children in same-sex marriage parents and so on and so forth.

Beverly Hills, 90210, has been featured in many films and television series, and several books have been written by the writer Mel Gilden. Also, several branches from the main project were created, such television series as Melrose Place (1993) and Model Agency (1994-1995), and in September 2008 the third spin-off series appeared – “90210: The New Generation.” But the story of Beverly Hills, 90210 didn’t stop there either, since in 2009 another series, Melrose Place, appeared.

And finally, we came to the most important event of the year 2019, since in February there was great news that the FOX television channel remembers Beverly Hills and not only remembers it, but is ready to “reanimate” it by -new, which means that the good old series “BH90210” is returning to the screens, not just one, but along with those actors (at least with the main part) who took part in the original show. And about this came a promotional video on the channel of the television studio “FOX” on YouTube.

The only thing that the audience will not see is Luke Perry who played the role of Dylan Mackay, the actor died on March 4, 2019.

The details of the plot of the new version of the project (which was initially called “90210”, but later, after the news of the death of Luc Perry, was renamed “BH90210”), were not disclosed, but the actors, giving interviews, happily confirmed this news, saying that they would appear on the show , where they appear in the role of improved versions of themselves.

According to the creators of the BH90210 project, this will be a rather risky and unconventional approach to reloading the well-known and beloved show, since the actors of the original cast will intersect with other characters and create new, unexpected turns in the development of the storyline over six episodes. And yes, Shannen Doherty, known for her scandalous temper, taking herself in hand, also joined the project.
Well, what exactly awaits you, our dear viewers in this long-awaited reboot, you will find out if you watch online, the series “BH90210”. 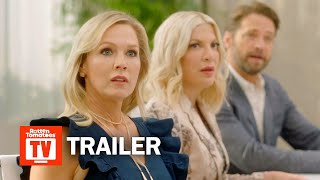 Siren
7.0
TV show Siren is set in a small town on the seashore where something truly outstanding happened. A diva emerged from waters and started wrecking everything ...