Scene San Francisco, 1987 year. Students listen to a teacher telling that the culprit of the First World War was an ordinary Serbian teenager, a commoner with a pistol who decided to kill. The history teacher is trying to convey to the students what the results of the actions that triggered the chain reaction, as a result of which there was a second world war and the so-called “cold war” began. But for the most part the guys are not interested in history, they are busy with their own, more important, in their opinion, affairs. Although the history teacher also does not miss, he instantly puts the guilty in place and continues to broadcast further with icy calmness, asking the students about whom they would have killed in a rage or wanting revenge.

This is a school for the “elite”, for those whose parents are rich not because of their diligence, but because their money is acquired by “dishonest”, criminal means. This is mostly “bloody money” and the students at this school are well aware of this. They are aware of the affairs of their ancestors and even take part in their transactions. These are guys from rich families of criminal clans and they have their own “law and order” in school. Therefore, having received a stick on the nose, they do not turn their anger on the teacher, because he is much stronger, smarter, tougher and he is against corruption, drugs and sex. They are simply looking for someone who is weaker to take out their anger on him. Our hero was in this school by accident. Marcus grew up in a shelter, but trouble happened there and the boy was left without shelter, without means of livelihood and without friends. But besides, he has to hide from the police, who are looking for him on suspicion of dozens of murders.

Marcus, the boy from the orphanage and practically growing up on the street, ended up in this school and he will now have to use all his survival skills in order to really survive and not be “eaten” by those who sense a weakness a mile and are ready to tear you to the pieces. They will not give indulgence and will not step aside when you, exhausted and bloodless, will fall to the ground. On the contrary, they will kill you helpless and miserable, unless you can prove to them that you are stronger and you should not just be reckoned with, but you have to be afraid and pass by with hundreds of steps. Whether our hero will be able to survive in this incessant nightmare, you can find out by watching the online series “Deadly Class”.

Deadly Class season 1 is a much anticipated TV show mostly due to the fact that new cultural icons of film making are behind the scenes of this new Sci-Fi, superhero series.

The Russo Brothers are quite famous for their amazing films in the MCU, films that launched their careers to heights no one predicted just 5 years ago. They are good at telling a cohesive story based on another medium. When they announced that they are planning to turn one of the best comics in the current media space into a TV show, people were understandable excited. Finally, we can watch the show and enjoy it.

Deadly Class season 1 delivers on all fronts. Camerawork and set pieces are as good as you would expect from excellent film makers. While the budget is not as high as some tent pole Hollywood movies would have, the show feels expensive and rich despite lacking in some areas. The cast is young and consists of aspiring actors who seem to be very passionate about their roles.

The story is a weird amalgam of ideas that attracted millions of people all over the world. It is a superhero story about vigilantes and villains yet it is told from a perspective of a teenager who enters the period when most important life choices are made!

Watch it online and enjoy every single second of it! 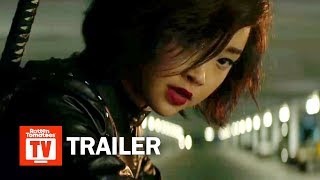 Dogs of Berlin
7.5
Dogs of Berlin season 1 will be your first step into the world of European policemen and how they deal with crime. This series is a ...