Emily Dickinson is one of America’s most famous poets. The main character of this series is underestimated by many. The fact is that once a writer made a fuss in the literary community, turning people’s ideas about poems and creativity in principle.

Emily went against the norms and foundations, violating all the canons and laws of versification. Her poetic liberty shocked readers and critics who believed that such creativity had no place in history.

True, the main character did not hesitate to express everything that she thinks. This attracted the attention of the public and readers who, even after many years, continue to be interested in her strange art.

A biographical series, the main character of which is perhaps the most famous, and at the same time, the most talented poetess of America Emily Dickinson. Note that she lived in the mid-nineteenth century, and contemporaries did not appreciate her poetic heritage too much. However, every year her work interests more and more fans of poetry, who find it very modern and relevant.

And indeed, at first glance, her poems may seem somewhat strange and not entirely clear. However, they are based on a deep philosophical view of the world and at the same time an excellent education.

During her life, Emily did not have big ambitions and published about a dozen verses, while the full volume of her legacy is about two thousand. The unwillingness of publications can be understood, since few understood it, and the form was so innovative that it caused only bewilderment. Therefore, all that she tried to publish was deeply edited, which brought incredible suffering to the poet’s tender heart. Her poems, both in content and in poetic form, have no analogues among her contemporaries, but nowadays they look quite relevant: she used a short line, used very original punctuation, and did not give names to her sketches.

In content, these are reflections on life, death, and immortality. It can be seen that the young woman thought a lot on these topics, since the same motives are observed in her private correspondence with friends.

In full, her poems were published by the sister of Emilia Lavinia, who found them after the death of the poetess. It happened in 1886. But even then, in 1890, her poems were again edited. In its original form, they saw the light only in 1955 and at the same time made a real sensation among connoisseurs of literature. She was recognized as one of the most outstanding Poets of America, and in 1985 they even called the crater on Venus.

History reference:
Emily Dicknson hails from Massachusetts, where she was born into a family known lawyer and later a politician. The girl received an excellent education and very early began to write poetry and essays, but almost no one knew about it.

During her trip to Washington, where her father worked then, Emily met a priest named Charles Wadsworth. He became her closest and most trusted friend. And although they met only twice in their lives, their correspondence did not stop until the death of Charles in 1882. It was he who had the main influence on Emily’s worldview.

In everyday life, she was very eccentric and introverted. Never went down to the guests. Most of the time she spent in her room and always wore a white dress. But she had many friends … by correspondence.

After in 1862 she had a break with a man whom she loved very much, the poetess generally ceased to communicate with people, except her closest relatives.
Emily died in 1886 at the age of 55. She probably had problems with the vessels. 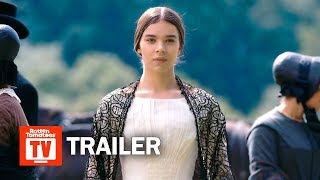 Veronica Mars
8.3
The tiny city of Neptune, located in California, is shockingly murdered. The victim is the 16-year-old girl Lily, the daughter of the richest city dweller, magnate ...

Back
7.3
The series is from the screenwriter "Pip Show" with one of the best comedy duos in Britain. After the death of his father, Stephen inherits his ...

Turn Up Charlie
7.2
The main character is a DJ and an avid bachelor Charlie (Idris Elba), who is going through difficult times. Suddenly, he gets a chance, perhaps the ...