After a ghost starts in a bookstore, literary characters come to life and come to be among us. Four friends are trying to solve the mystery of a ghost together and find out what keeps it in our world. In search of an answer, the heroes follow clues encoded in secret messages that only they see.

Oscar-winning screenwriter and director Luke Masenie for the short film “God of Love” presents his new work “Ghostwriter” which is a reload of the teenage detective television series of the same name created by Liz Nilon, released from 1992 to 1995 and telling about four children who quite by chance released into the real world of fictional, but such real ghost monsters.

The Liz Nilon series was created as a reading and writing program for primary and secondary school children. In each series, the heroes of the series were supposed to solve the mystery, and the children were invited along with the characters, using hints using reading and writing to unravel the secrets, as the heroes of the series do. The original project was recognized by critics and was awarded several very prestigious prizes for “representing a realistic, racially diverse world, showing everything in an attractive mystical story for children.” Despite this, the original project was closed due to lack of funding.

Well, now, the turn has come for Apple TV +, which is gaining strength, which took it “under its wing” and entrusted the reboot to Luc Maseni. The action of the series Luke Maseni, also takes place in Brooklyn, where one of our heroes named Rubin moved with his family. Here he was lucky to make new friends, and together with them, visiting a strange bookstore located next door, meet new ones with book characters who began to appear in the real world.

It turns out that a certain ghost is operating in this store, and it is he who releases fictional and animated characters from books from him, pursuing his own goal. Now the guys need to combine all their forces and help the characters return to their worlds. First, the heroes from the work “The Adventures of Alice in Wonderland” must be returned to the book world. As soon as they completed this task, they immediately discovered that the hooligan ghost had sent characters from the “Jungle Book” to them and Mowgli was in their world, who was supposed to find the missing grandmother’s cat. However, Mowgli suddenly disappeared somewhere, and the guys have to call Bagir for help to find Mowgli himself to return them home.

Well, what else awaits the children and their friends in the future, you can find out by watching online the teenage fantasy series – “Ghostwriter”. 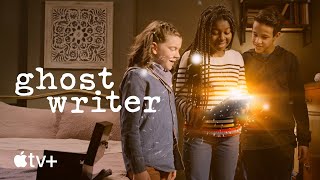 Treadstone
7.1
Treadstone tells of a secret CIA operation that should awaken a special script in agents around the world that forces them to start a mission. Thanks ...

Another Life
4.9
The focus of the plot of the series "Other Life" is Niko Brekinridge. The astronaut, together with his brave team, stumbled upon an amazing find. Some ...