The protagonist of the series – Dr. Harrow. Daniel is considered one of the best doctors in the field of forensic examination. He was able to uncover any complex and confusing business, using his professional skills, honed to automatism.

A man tries to help all those who apply to him, but often he himself has serious problems. His family and himself are threatened, and his career is in danger. The man understands that the case is connected with one of the investigations of the past, but so far he cannot reveal who exactly is threatening his family.

Harrow is an action-packed crime series that tells the story of one person who went against the system.

Harrow – American-Australian detective series, in the center of the plot of which the doctor-criminalist named Daniel Harrow.
In addition to being a professional of the highest level, Dr. Harrow has another remarkable quality of his personality – he has a keen sense of justice. And this circumstance pushes him to the most difficult way – searching for the truth, to which he is ready to dig out from a sense of compassion for the victims … The source of primary information for him is the bodies of the unfortunate, according to which he reads what happened to them, as a ranger in the prairies traces of animals and people about what happened there.

But if the Pathfinder’s goal is to find food for food, then Harrow has a higher goal – to find justice, and give it back, even to a deceased person. Sometimes it comes to the fact that from the side it can be called revenge of the guilty … But this is from the point of view of the law, and not justice. And what is more important in this life – right or deserved retribution? Everyone answers this question for himself, because, unfortunately, the society has not yet found the mechanisms that could provide this feeling that is natural for every normal person. Only one puts up with the fact that the law is not perfect, and the other begins to act.

Dr. Harrow is an incredibly talented pathologist, and besides, he has excellent medical and human intuition, which is based on extensive knowledge in medicine, biology, anatomy of the human body, chemistry … If he takes it, the offender has no chance of remaining unmasked. Such successes of the doctor do not go unnoticed by his colleagues, the police and even the secret services, who in a difficult moment turn to a talented specialist and expert.

But everyone has their own skeletons in the closet. And Harrow is no exception. And sooner or later, these skeletons begin to fall out from there and in the most shameless way to interfere with an established life and a career built with such difficulty and diligence.

So it is with Harrow. The past suddenly came so close that it threatened everything that he had achieved and that he appreciates in the present. It turns out that Robin Hood – Harrow is not so perfect, and there are many things on his conscience that he prefers not to remember … And no matter how much he does, his own evil will overtake and try to destroy. And what Dr. Harrow is hiding can in no way be justified or redeemed by what he is demonstrating. Now it can explode the weight – and his family, and his career, and even the idea of ​​himself present – good and fair. And the main thing is to completely destroy the reputation, and after that it will never rise.

So can a hero treat himself with the same degree of justice as others? Can he resist the blows of fate and stay himself? And what kind of self – what was once or what was now as a result of many years of work and work on yourself?

To understand Dr. Harrow, and perhaps a little in yourself, watch this dramatic series, which at first seemed only detective … 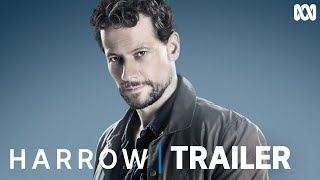 In the 1st season of Harrow we can meet a successful doctor and criminalist – Dr. Daniel Harrow. He has a truly excellent quality – a sense of justice. He always tries to find a truth. Working with the bodies of dead people as a result of some incidents, he tries to help these victims. Sometimes it looks like revenge for the innocent. Being a very talented and clever person, Dr. Harrow achieves significant successes in his investigations, which can remain completely unnoticed by his colleagues – special services and police.
In the 1st season of Harrow his life has a lot of changes. Now, Daniel understands that it doesn’t matter how many good deeds he has done – his own sins will be overtake him anyway. Despite his struggle for truth and justice, Harrow has done a lot of things that he has to hide in his life. The past came to him and now threatens to destroy his career and his strong, unsuspecting and loving family, trample on his good nature and spoil his reputation, because the truth will come out. Will our protagonist be able to overcome all the hardships on his way? We can learn it soon in this outastanding and amazing season of Harrow. Sit back comfortably and watch it just now!

The Purge
6.3
Someone will call what is happening madness and try to do everything not to follow the rules of the "Judgment Night." Someone will have to come ...

Caught
6.3
Here is the series "In the trap", filmed on the best works of Lisa Moore. The plot focuses on the criminal David Slani. The main character ...