Nightflyers season 1 brings us to a hi-fi space ship that drifts in the universe. The crew of this ship is a team of scientists and explorers who wanted to learn more about the vast universe around us. Their mission seemed very peaceful and relatively simple. However, they were the first humans who met an alien form of life. The contact was not successful and the team was scared. Nevertheless, their curiosity and desire to learn allowed them to overcome their fears and start learning this new species they found. What they did not expect is that this scientific endeavor would be the scariest thing in their lives!
Nightflyers season 1 is a great space horror that happens in a confined, isolated ship. Something akin the Alien, a truly masterful display of what this setting can bring to the table when it comes to creating an exciting horror movie. Our heroes are trapped and want to survive. However, they don’t even know that their own teammates and people behind the scenes are against them. When their own lives and even the fate of humanity is on the line, people start showing their true colors. Watch online this amazing, thrilling TV series about a brave crew lost somewhere in the depths of pitch-black space. 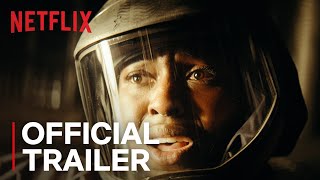