The powerful director of Wayne is headed by Steve Pink, a filmmaker who began as a comedian, then began writing scripts actively, and then directing many projects without leaving his favorite entertainment genre. On his account, such comedies as “The Time Machine in the Jacuzzi” and “We were Received!”, And on the projects “Fanatic” and “Murder at Gross Point” he was part of the scenario groups.

Despite his fifty-two years of age, it seems that Steve will not leave the period of rapid puberty, so that in the elements of teenage adventures, especially with a bias in black humor, he will feel like a fish in water.

Now to the plot:

In the center of the story is a young hero named Wayne. He is only fifteen, but trouble has already fallen on him – his father, whom the boy loves very much, lies near death. And most recently, he hijacked a car. This is a rare, we can say an antique copy of 78 year of release – Pontiac Trans Am. This news can finally finish off the unfortunate patient, and the son does not know what to do in this case. Whether to go look for a stolen rarity, or stay at the deathbed of the pope.

And then his hesitation comes to an end, after he meets a funny girl about his own age by the name of Del. This young girl does not doubt for a minute that the criminal should, if not stay in prison, as the unforgettable Gleb Zheglov used to say forever hesitant Volodya Sharapov, then at least he should be punished, and justice should triumph in any scenario of the Pontiacs cycle open spaces of American hi-vey.

In general, having ordered, and having led to a common denominator their youthful convictions about the triumph of justice, this couple goes on a cross-bike from Boston to the sunny Florida in the wake of an antique car.

They do not for a moment doubt that the path will be long and dangerous, but they are ready for anything, and even to use quite cruel methods of rearing the villains, because their youthful maximalism and poor knowledge of the Sermon on the Mount leads them to the idea that this is cured like, or to put it in the terminology of the Old Testament, rely on the eye to pull out the eye, and for the lost tooth to knock out one from the offender. In short, it is not known whether the heroes are familiar with these ancient wisdom of the ancient Semites, but, if they did, then they took them quite literally, and if not, they themselves came to a similar conclusion.

So they will have to restore justice, and along the way they will even have to fall into the hands of citizens with special cruelty.

See this dynamic, rich and filled with black, but this makes the anti-hero road movie even more ridiculous, humor!

Wayne season 1 has a lot of charisma and character. The initial trailer was something that created a lot of buzz around the show since many did not understand what was happening. However, it quickly changed after the series finally started showing what it has.

One of the issues with YT Originals is that the content is often of low quality and poor production design. The vast majority of content creators are not professional film makers and it shows. There is not enough glamour and polish to series that want to compete with original content produced by experienced showrunners. However, what you need is to change the course.

Wayne season 1 is like the Cobra Kai show. Both series take and idea and just go with it. They do not want to make anything that contradicts their vision of the story and they want to focus the narrative on their characters which is exactly what you need to when your budget is so low that you can’t afford a single explosion or expensive set pieces. Exploring why characters behave the way they do and how they develop relationships is exactly what both shows try to focus on.

If you are looking for a weird drama filled with gritty, dark humor, watch online this amazing show that takes on a road trip that you won’t forget! 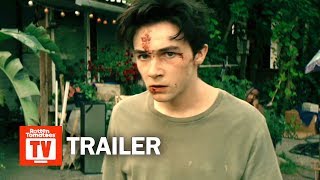